We ought in general to consider whether other character complexes, too,
do not exhibit a connection with the excitations of particular erogenous zones.

The end of the 20th century saw Viktor Tolkachev (1940—2011) [on your left], a psychologist from St. Petersburg, Russia, inspired by the work of Freud and his colleagues to lay out the character types linked to the orifices of the head (eyes, ears, nose, and mouth). As Tolkachev himself claimed, that step was only made possible by his teacher, an academic named Vladimir Ganzen (1909—1996) [on your right], whose book, “System Descriptions in Psychology,” laid the foundation for a systematized view of sensitive orifices.

Viktor Tolkachev in so doing built an entire system that included eight character types, introducing the concept of “vectors” and naming his theory “Applied System-Vector Psychoanalysis.” Vectors were understood to entail all the psychological and physiological qualities (character, habits, health, and more) that are linked to one or another of a person’s bodily orifices.

In contrast to the accustomed “personality type” (of which there is usually just one), a person can have multiple vectors, each of which has a separate potential from 0% to 100%. Viktor Tolkachev ran seminars on that system, teaching more than 6,000 people over 30 years across Russia, Germany, and the US. 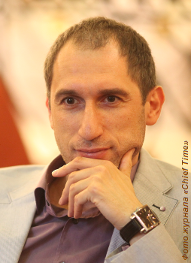 Michael Borodiansky, one of Viktor Tolkachev's first students, took the vector theory and turned it to practice, calling it the “Psychological Vector System.” His biggest contribution was vector acceptance, a new concept that turned out to be key for the practical application of this field.

Acceptance is an attitude toward how one’s own vector or that of others manifests itself where we assign it no positive or negative value, do not consider it bad or good, and avoid making a judgement as to whether or not we need it. Acceptance is also acknowledging that vectors serve a purpose, even if we do not yet know what that purpose is. Michael Borodiansky set up a formula for how to calculate vectors and co-authored a test that evaluates natural vector potential and acceptance levels. Anyone who would like to take the Tolkachev-Borodiansky test is more than welcome to at Psy8.ru.

Michael Borodiansky’s work is accompanied by other students of Viktor Tolkachev, all of whom are developing the vector theory in a number of different areas, running training seminars, and writing books and articles. Among them are: Ludmila Perelshtein (author of “Careful: Children! Or a Resource for Parents Capable of Surprise”); Elena Kudryavtseva (seminars and articles on applying the vector system in consulting); Yuri Burlan (the System Vector Psychology portal); Alexander and Tatiana Prel (authors of “Why Did We Grow Up Like This?”); and others.

“Psychology and Your Orifices” brings together knowledge and experience accumulated over several decades. It offers a detailed description of each of the eight character types as well as an algorithm for accepting and realizing vectors in ourselves and others, all of which is built on many practical examples and ready to be implemented in widely varying situations.

Learning about the different vectors and how to accept them will help readers build balanced relationships with themselves and the people around them, feel complete, find their path in life, and follow that path with harmony and happiness.